MANITOWOC – From humble beginnings in 1965, Manitowoc Tool & Machining has grown to one of the largest Computer Numerical Control production machining companies in the nation.

In the industry, a large player is considered to have 100 employees. MTM’s workforce has 310 employees.

Last year brought many improvements and diversifications to the company with facilities on Clipper and Expo Drives. Company sales grew more than 20 percent, and there was increased employment level.

The building of stamping dies and production stampings was moved to a separate facility. The new facility is state-of-the-art in terms of technology and flow.

This decision put a spotlight on that business unit, and its key employees flourished in the new environment – so much so that a 17,000 square foot addition was added to the facility in December.

This addition occurred less than one year after occupancy of the new facility.

The addition represented the 12th building expansion, and increased MTM’s work space to 250,000 square feet, or 5.7 acres of manufacturing.The new facility also is state-of-the-art in terms of quality control. MTM quality is judged in defective parts per million (PPM).

The MTM stamping plant operates at a quality level of less than 150 PPM, meaning 99.99 percent of all products shipped are acceptable. This puts MTM at a strategic advantage compared to overseas competition. This year will bring many new changes for MTM stamping plant, including an increase in personnel, additional automation, additional stamping equipment, and diversification into products and services currently not available. With solid core competency, the company’s president, Scott Mertens, believes it is important to expand the company’s current business scope.

MTM has the skill level and automation to be competitive in an expanded arena.

MTM had the strategic goal of developing customers in different industries to have diversification in our customer base.

This goal was clearly accomplished and aided MTM in its strong growth. The new industries served fueled the addition of new equipment and process.

It also expanded our customer base to worldwide, vs primarily the United States.

By gaining international customers, MTM has proven it can successfully compete on a global basis.

Part of their responsibility is to systematically go through the major processes at MTM to be assured operation to 3.4 defects per million (Six Sigma), with zero waste in the system.

A diverse customer base, extreme lean process and a Six Sigma quality level will enable MTM to continue the solid growth and expansion strategy the organization’s history has witnessed.

8 Aug 2019
Counting down the hours until we can put this 34,000 square feet to work! #metalstamping #metalfabrication #toolanddie Let us at…

3 Jul 2018
Manitowoc Tool and Manufacturing, LLC pays tribute to all our past & active military members for their dedication to service, and… 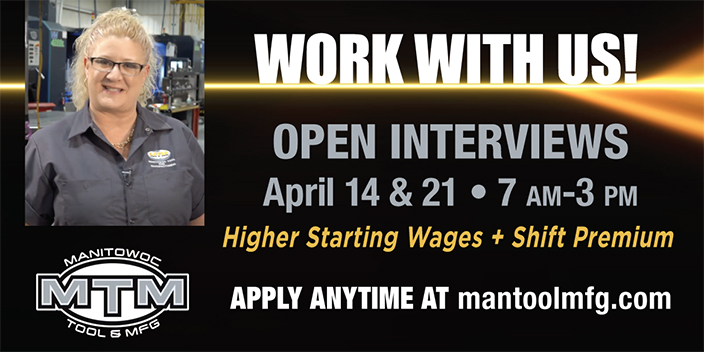 WE ARE HIRING! Open Interviews at Manitowoc Tool & Manufacturing, LLC

5 Apr 2021
We will be hosting open walk-in interviews on April 14th and 21st from 7am-3pm. Anyone interested in learning more about…

This is how we provide YOU the BEST IN VALUE

5 Sep 2019
Our processes, engineering and tooling dramatically affect the cost of your stamped & fabricated parts. Don’t be fooled into thinking…
Menu